Search Work with us

Do We Need a Traditional Operating System?

The work environment in an office (or home office) has evolved and the workers are dependent on specific applications to do their jobs. Just like a smart phone, a computer is just a way to deliver applications in an efficient manner. As we progress through time, we will see more application interaction. This naturally leads to ask the question – do we even need a traditional operating system like Windows anymore?

I’m not going to say that we can completely eliminate an Operating System, that’s simply not possible. The purpose of this blog is to demonstrate how a fully interactive Operating system like Windows 10 or OSX is not really necessary to fulfil your duties at work. Also, if we practice the principles of least privilege, why do we want to give access to tools that can change configurations?

The general concept of a graphic based operating system is to enable users to access, and use applications directly from their own device. The most common Operating Systems would be Windows (Microsoft PC), OSX (Mac), Android (Google), iOS (iPhone), and Linux. Fundamentally, they all do the same thing – give you some personal preference options, provide a file system for data and give the ability to install and launch applications. Under all the nice graphics are a lot of software that needs to be maintained and can be potentially vulnerable to malicious attacks.

In a business, a network is connected to a directory (such as Active Directory/LDAP) that helps administer policies to the end users that are commonly on a computer. The Directory is paramount to enforcing policies that lead to security best practices. Directories can also be used to serve applications to specific users. Powerful applications need powerful desktop computing to run locally, so expensive local resources cannot be shared.

If we could move the Directories to the Cloud and Steam the Applications from the Cloud, do we really need to worry about a traditional Operating System?

Virtual Applications in the Cloud

A new trend in the Information Technology arena is to virtualize applications and deliver them in a fully containerized workspace. This means, engineers have the ability to serve any application from the cloud and stream it to a workstation anywhere in the world. An example of this can be anything from basic apps like Microsoft Word and Email to more complex tools like 3D Graphic rendering. Users can access them from any device with an Internet connection and have an exclusive view into the application that is actually running on a server in the Cloud. This helps with network infrastructure efficiency, scalability, and security. Citrix is the global leader in application virtualization and their Workspace technology has the ability to streamline operations by centralizing it all in the Cloud. In the Cloud, the business must maintain a Directory and a Citrix Cloud Controller. The Directory manages the internal policies and the Citrix Cloud manages application delivery over the Internet.

Users will be able to access the designated applications required to do their job, all they need is to access a menu from a Cloud gateway. So, how do we get around an OS? Well, you still need something basic to stream the applications, but it doesn’t have to be a big clunky OS like Windows or OSX. Instead, we can set up a very basic Linux operating system that is designed simply to speak with the cloud and steam the applications.

It’s just like a smart TV that streams cable, you turn it on and get a menu of applications that you can use to watch movies, shows etc. With Virtual Apps, you would select the appropriate application and it would instantaneously launch in a new window, from the cloud. Because you can have heavy, shared resources at on the server, various users will get the same access and performance from Microsoft Word and a Graphic Processing tool. Even a smart TV has a very lightweight OS built into it, but it is designed to deliver streaming content – nothing more, nothing less.

The million-dollar question is, why would we want to get rid of a traditional Operating System? The answer is all about creating operational efficiency, and eliminating unnecessary system maintenance. For example, almost 80% of all businesses run off Microsoft Windows with a majority of them on traditional workstations (PCs and Laptops). If we could eliminate Windows and the associated machines, we would no longer need to worry about the following:

If you look at the costs associated with that, it could be thousands and easily millions of dollars in annual savings if we just changed the way we look at this.

The NoTouchOS is a super light wight Linux operating system that has 2 basic capabilities – run Chromium Browser and securely connect to Virtual Apps and Desktops. At the end of the day, this basic OS simply acts as a conduit to connect you to your applications. NoTouchOS can run on the simplest of computing systems, such as a Raspberry Pi. A user simply turns on the machine, NoTouchOS runs, and users can launch all of their applications from the Workspace browser. Anything including SaaS Apps, MS Word, Outlook, or Server Applications like 3D Graphic Rendering will run in a window from the Cloud.

A personal Workspace is a conduit to access everything you need to do your job; Files, Applications, and even Desktops. There are many flavors of a Workspace, Mindcentric specifically partners with Citrix to for this use case. The concept is simple, a Workspace is a Cloud based application that securely connects you to a server that hosts all of your applications. Workspace securely connects via a Cloud gateway, without the need of a VPN. This makes the Workspace completely mobile and users can access it from any device. All they need is an Internet connection and their credentials. 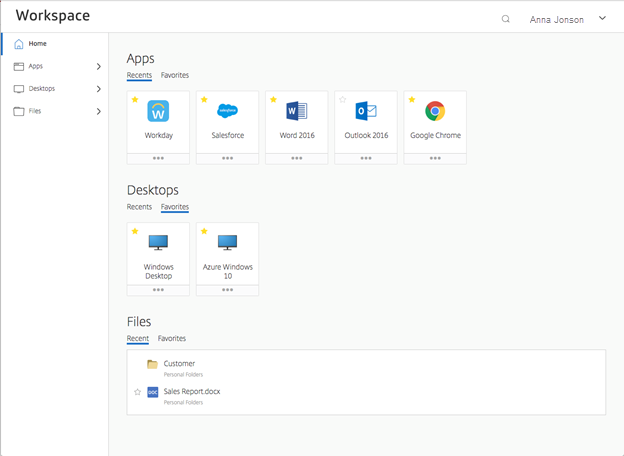 The most glaring example to point out here is that if we eliminate Windows 10, we remove a major vulnerability. This is one less device to manage and no more Operating system that can be infiltrated. A Citrix Workspace steams the experience through a secure Cloud Gateway, so no VPN is required. Through the Gateway, there are other built in security features such as Multi-Factor Authentication (MFA), and Single Sign-On (for SaaS applications). The Gateway integrates with Directory Services such as Microsoft’s Active Directory, allowing policy to be enforced over the Cloud.

Virtualizing applications and provisioning/serving them from the Cloud streamlines much of IT’s operations. Not only that, it significantly simplifies the whole thing as almost everything is centralized. If a user needs a new application, just click a few buttons. If we need a new user, just spin them up in minutes. It also reduces operational costs as headcount can be reduced, and the same goes with hardware and software investments.

Our team is a Citrix Cloud partner and we own and operate our own Data Center infrastructure. Mindcentric’s infrastructure is built for high performance application/desktop streaming. Everything runs on Hyper-Converged servers with in-line SSD storage. This delivers excellent IOPS and load times across the web.

For application streaming, we run NoTouchOS on Raspberry Pi4 devices. These devices are more than enough, coming in with Quad Core ARM Processor, 8GB of RAM, Built in BlueTooth and Wifi, Dual Monitor with 4Kp60.

NoTouch can run web application locally (such as video/music streaming and/or web conferencing. Meanwhile, it can easily launch virtual applications and even desktops. It has a built-in fleet management system so that devices (and associated firmware), can be managed remotely.

It is also possible to run virtual applications, but from a traditional workstation with a traditional Operating system. This is highly practical for businesses that need flexibility and work with client – server applications that are traditionally leveraged from Terminal servers. In this case, we can deliver a true hybrid Cloud deployment that mergers the experience between the Cloud and the desktop.

To learn more about our services click the “Work With Us” tab in the upper right hand corner of our homepage.

If you have any questions, we'd love to chat about how we can help your company.